Several of Don Wiegand’s sculptures have been adapted for use as awards and presentations for worthy individuals. These bas-relief designs are derivatives of his original works and are minted in bronze, silver or gold. 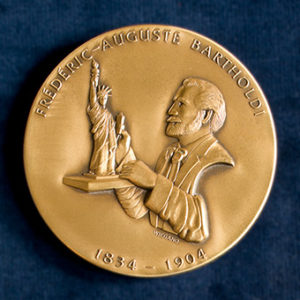 Frederic-Auguste Bartholdi Award, commemorating the September 2004 visit to France by The Statue of Liberty Club to honor the 100th Anniversary of the death of Auguste-Bartholdi.

The Spirit of Hope Award

The most famous of these is the Spirit of Hope Award, crafted in the image of Bob Hope. On exhibit at the Pentagon and the Tomb of the Unknown in Arlington, Virginia, the Spirit of Hope Award was designed to be given to individuals who, like Mr. Hope, have selflessly sacrificed to support our military and first responders. Recipients of Mr. Wiegand’s design include Walter Cronkite, Sen. John Glenn, George H.W. Bush, Ann-Margret, Gary Sinise, and many other notable individuals.

The Lindbergh Medal and Other Honors

Other derivatives have been created by Mr. Wiegand and his foundation for various not-for-profit organizations to honor their donors and supporters.

The Lindbergh Medal, for instance, is gifted each year at the Smithsonian Institute’s National Air and Space Museum and by The Lindbergh Foundation for their various honorees.

The Foundation itself also presents derivatives in support of those who give to and honor their fellow man.

As is the case with all awards and presentations offered by The Wiegand Foundation, these medals cannot be bought, but must be earned. 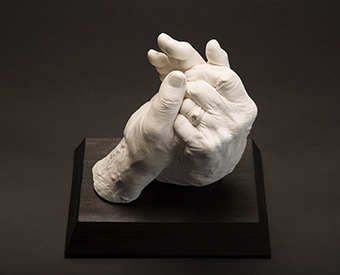 By way of honoring other individuals who have contributed to their country and their community, Mr. Wiegand and The Wiegand Foundation conduct personal life-casting. This artistic presentation borrows from a technique thousands of years old and is archival in nature. The subject’s hand(s) is cast in plaster and creatively posed, quite often with an appropriate object, to signify that person’s vocation or mark of fame.

When finished and mounted, the life-casting stands as a wonderful commemoration of the subject’s contribution to society and a fitting heirloom for the family.