From an early age, Don Wiegand was fascinated by shape and form. From assembling paper cutouts to arranging sticks and branches into makeshift structures, Don began his journey into interpreting life in both reality and the abstract. His early sketches and paintings had a character all their own. As one of his art teachers put it, “You draw like a sculptor.” That comment proved to be prescient as Don progressed through high school sketching and painting, to arrive at Washington University in St. Louis, where he would study sculpture and earn a Bachelor’s degree in Fine Arts. 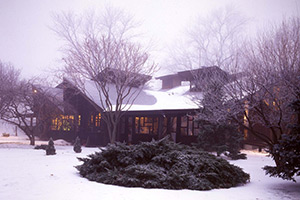 In 1965, while a junior in high school, Don began the work of constructing his home and studio. The central structure was a brick slaughter house erected in the 1920s, which was later abandoned and fell into ruin. After restoring the old structure, Don built around it according to the unique design in his mind. Calling it his “largest sculpture”, he would continue to refine it until August of 2013, when he signed his work, burning his brand into the structure. The studio was declared an historical landmark by the City of Chesterfield, Missouri in 2008.

As he demonstrated with his largest sculpture, Mr. Wiegand’s penchant for shape and form would often reveal itself in architecture. In the 1970s, he formed a design/build company which he would pursue for a few years until his love for sculpting once again tugged at his heart. He progressed from a few commissions in the late 1970s, to a number of signature pieces created in the 1980s. The most notable of these was his portrait in the round of Charles Lindbergh. Casts of that piece may be found in various parts of the world, including the Smithsonian Institute in Washington, D.C. He followed that with portraits of Ernest Hemingway, Mark Twain, Christopher Columbus and many more inspiring pieces.

Mr. Wiegand’s studio, located at One Wiegand Drive in Chesterfield, Missouri, was perhaps the most inspirational of his many creations – and it was also the most heart-breaking at times. On Christmas Eve, 1971, it was gutted by fire. Friends and family told Don to walk away, only to watch him return days later with ladders and wire brushes to restore his sculpture. 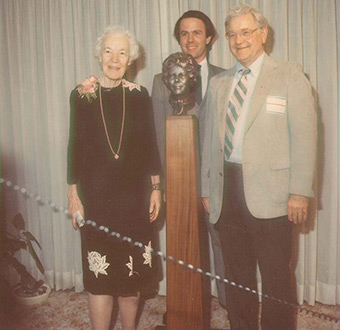 The great flood of 1993 carried twelve feet of water onto the property, causing severe damage to the studio. Once again he was counseled to walk away, but he returned to restore the building, driving scores of piers under the structure to shore up the foundation. The U.S. Army Corps of Engineers attempted to take the property in 2009 as part of their effort to construct a levee wall adjacent to the studio. After a long legal battle, the Corps changed their design to allow the structure to remain and the sculpture was saved yet again. The Wiegand Foundation purchased the studio in June of 2019 and is currently undergoing renovation.

In the period just prior to, and following the flood, Mr. Wiegand undertook several commissions to sculpt and build heroic monuments for various organizations. His stainless steel, 14’ sculpture in the round of the Virgin Mary may be found at the Shrine of Mary, Mother of the Church in Laurie, Missouri.

Another of his famous monuments is that of Winston Churchill delivering his Iron Curtain speech, which resides at the Churchill Museum in Fulton, Missouri. Others, such as “The Gift Of Life” and “The Eternal Priesthood” may be found in St. Louis, Missouri.

Likewise during this period, Don began to adapt some of his pieces for minting into medals. The most famous of these is the Spirit Of Hope Award, which resides at the Pentagon and the Tomb of the Unknown Soldier in Arlington, Virginia.

This particular award inspired Mr. Wiegand to establish The Wiegand Foundation, Inc. Through the Foundation bearing his name, Don Wiegand continues to honor those who honor and support their fellow man. Mr. Wiegand is still sculpting and creating memorable pieces at a temporary facility in the Chesterfield Mall, about a mile from the studio.